Cell transformation arises from the activation of oncoproteins and/or inactivation of tumour suppressor proteins. The molecular mechanisms whereby these mutations cause cell transformation have been intensively studied by many researchers, and a variety of cell-autonomous signalling pathways have been revealed. On the other hand, the fact that cancer cells live in “a society of normal cells” has been overlooked or neglected in most studies. During the initial stage of carcinogenesis, transformation occurs in a single cell within an epithelial monolayer, however it remains unclear what happens at the interface between normal and transformed cells during this process. Do surrounding normal cells, for example, recognise the transformation that has occurred in their neighbour? What is the fate of the transformed cell when surrounded by normal cells? Using newly established cell culture systems, we have found that the interaction with surrounding normal epithelial cells affect signalling pathways and behaviour of transformed cells. One of our recent studies is introduced below.

Characterization of the interface between normal and Ras-transformed epithelial cells

(Hogan et al., 2009, Nature Cell Biology)
Ras is one of the best-characterized oncogenes, and the mutations in the Ras gene are found in more than 30% of malignant human tumours. To characterize the interface between normal and Ras-transformed epithelial cells, we established MDCK epithelial cells expressing GFP-tagged constitutively active oncogenic Ras (RasV12) in a tetracycline-inducible manner (MDCK-pTR GFP-RasV12). To examine the fate of a single RasV12 cell in a monolayer of non-transformed MDCK cells, MDCK-pTR GFP-RasV12 cells were labelled with fluorescent dye (CMPTX) and mixed with normal MDCK cells at a ratio of 1:100. The mixture of cells was then cultured on collagen matrix in the absence of tetracycline until a monolayer was formed. Subsequently, GFP-RasV12 expression was induced with tetracycline and the fate of RasV12 cells surrounded by normal cells was observed. Within 13-25 h after tetracycline addition, the RasV12 cells were often extruded from the apical surface of the monolayer (Fig. 1a). 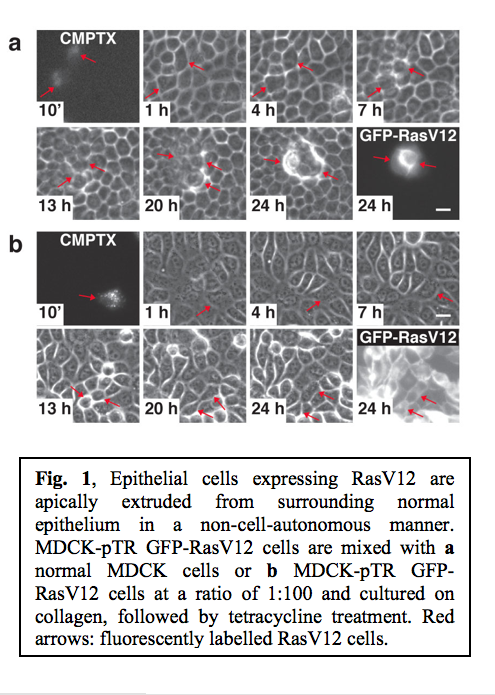 Confocal microscopy analyses revealed that these protrusions extended beneath the neighbouring non-transformed cells. When expression of RasV12 was induced in a group of cells within a monolayer of normal cells, major protrusions were frequently formed at the interface between RasV12 and non-transformed cells, but were rarely observed between RasV12 cells. This indicates that protrusion formation also depends on the interaction between normal and RasV12 cells.
In summary, when RasV12 is expressed in single cells within an epithelial monolayer, two independent phenomena can occur in a non-cell-autonomous manner (Fig. 3). 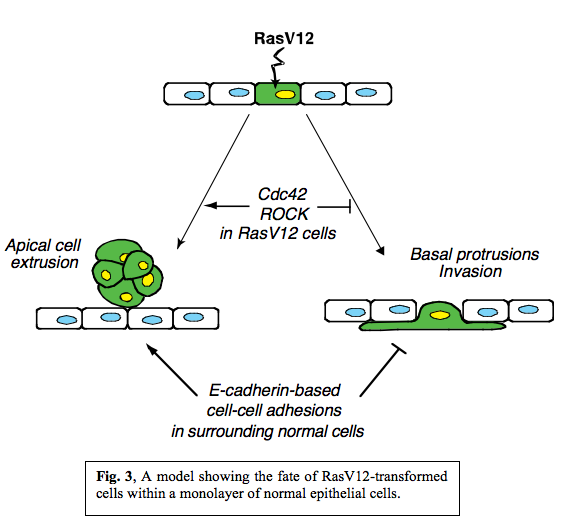 1) Characterization of the interface between normal and other types of transformed cells.

Our preliminary results suggest that the presence of surrounding normal cells influences signalling pathways and fate of other types of transformed cells, leading to apical extrusion or apoptosis of transformed cells. To understand molecular mechanisms, detailed characterization and analysis of these phenomena will be required.

2) Identification and characterization of molecules that are involved in cell recognition between normal and transformed cells and in various phenomena occurring at the interface.

The most fascinating question is how cells “sense” the differences with their neighbours and how various signalling pathways are regulated accordingly. To investigate these molecular mechanisms, we are currently using two screening methods: proteomic approach and cDNA microarray.。

3) Establishment of in vivo systems: Drosophila and Zebrafish.

Another vital question is whether the phenomena that we have observed in cell culture systems also occur in vivo. We are going to utilize Drosophila melanogaster and zebrafish systems to this end.